Fleet - a Planing-Hull Version of Flint

Back in about 2003 I was asked to design a rowing/small outboard boat for operations in a short, steep chop, with the emphasis on lack of pounding. The resulting boat, named Flint, has been very successful and popular. She is very easy to build - if you follow the assembly sequence - and a distictive feature of her hull is the fine, hollow sections in the forward part of the boat. What is amazing is that this shape can be produced from a single developed plywood panel. I have tried to achieve this sort of shape in the past using conventional projection of developable panels, but the geometry required to produce a hollow shape has always defeated me. The arrival of computer programs which have the ability to do the mathematics saved me from myself!

In recent times I have been approached by a number of people who have wanted to build a planing version of Flint. The hull of the original rowing/sailing/small outboard version is of the displacement type, although her fine sections and high length-to-breadth ratio mean that she can be pushed faster than her theoetical displacement speed which is 5 knots. On launching day we got her to 6.1 knots with two adults and two teenagers onboard, using a 2hp Yamaha at part throttle. Steve Dorrington got his to a speed of 6.2 knots under the urge of British Seagull 40-plus - certainly an achievement!

Bruce Erney, on the east coast of the USA modified his Flint to take a 6hp motor and got her up to 17 knots, I think, but he needed to put trim tabs on to overcome the tendency of the displacement hull to point her bow at the sky. I was concerned about the exercise, but Bruce had many successful trips while fishing in the big waters.


I've made a number of attempts at drawing a planing version of Flint and things were brought to a head this week when a friend/customer for whom I have great respect, asked me for a semi-disposable planing power boat which he and a friend could build over a weekend or two, to be powered by a 5hp outboard. He looked at few drawings I had on hand, and chose a preliminary sketch of a planing version of Flint, which I drew as a discussion piece for Rick Hayhoe a number of months ago.
In the above drawings you can see the substantial changes made to the shape of the hull aft of the midsection. I have retained the fine, hollow forward sections, although I've increased the rake of the stem very slightly in order to reduce the severity of the bending and twisting of the plywood panels. With good-quality ply the hull is easy to assemble, but some people still insist on using poor-quality sheets in order to save a dollar, and end up encountering problems - hence the alteration.
My aim with this design is to retain the extemely light and simple style of hull as seen with the original Flint, and to have her run efficiently with nothing larger than a 4hp motor. This is important in my part of the world because we can operate with up to, and including, 4hp without needing to register the boat. The customer wants to use a 5hp, and specifically asked for a water-shedding foredeck and side decks under which he can store fishing gear. He intends taking her into the open Pacific off the Queensland coast here in Australia, and so adequate emergency floatation is essential. His boat will have built-in buoyancy under the sternsheets (aft seating which extends aft in a horseshoe arrangement),  under the midships thwart, and under the large foredeck. We have not finalised details of the arrangement, but here is a very preliminary sketch with the decks and seating shown in blue.
This little article should give some indication of just how much the character of a boat must be changed when the mode of operation is altered. However, a completely open version with a very small motor may retain the spartan feel of the original, while still performing in the semi-planing and planing modes. When the plans are complete and the boat tested, I'll post more details. For those who want to read more about the original Flint follow this link and this link. 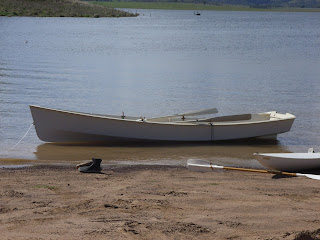 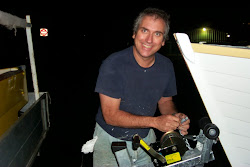